In 1995 Ball of Leaves was awarded the Environmental Sculpture Commission for the Corporate Headquarters of Salomon, Inc., at the now former 7 World Trade Center, New York, NY. It was my first public art commission. Ball of Leaves is an image of abundance and growth. In the sphere being is gathered and concentrated around a center. As a form it has many levels of reference, among them, the macrocosms and the microcosms, the world and individual man. The maquette which survives in the possession of the artist has been widely exhibited in the United States including the Museum of the Americas, Organization of American States, Washington, DC; in Trenton, NJ, both at the New Jersey State Museum in the exhibit Eyes on Trenton, curated by Margaret M. O’Reilly and Molly Merlino, and at Ellarslie, the Trenton City Museum; and, in 2013 in the Library of Life exhibit at Art in City Hall, Philadelphia, PA, curated by Jennifer Sontchi and Sean Stoops. Internationally it was exhibited in 2002 in the 3rd American-Hungarian Joint Exhibition, the James Pannonius Muzeum, Pecs, Hungary. It is published in 100 Artists of the Mid-Atlantic, E. Ashley Rooney, author, with foreward by Charles Yoder, Schiffer Publishing, 2011. 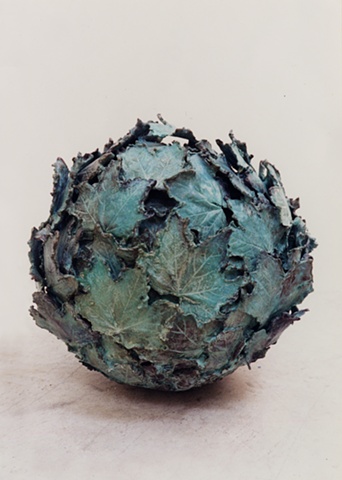